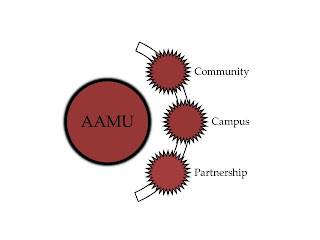 Posted by Tyler Pearson at 4:04 PM No comments:

I am so excited to share with you all the knowledge and experiences that the Alabama Agricultural & Mechanical University Community Campus Partnership (AAMUCCP) will be bringing to Huntsville, AL! We are very glad and fortunate for this opportunity to make a difference in the lives of many. Also, to be a representation of you in the best of fashions. Be sure to be aware of our daily/weekly posts about interdisciplinary programs and community initiatives that we'll be starting and doing throughout the year. Each posts will be enlightening and entertaining for you to read and enjoy! Thank you for your support! Stay tuned!